"These chocolates took my breath away!" - Terri Bergman, The Kitchen's Bounty

The delightful Jewel Box is a miniature take on the iconic Louis Sherry Tin.  Delivered in a signature red tin, this perfect gift has two of our favorite chocolate delights:  Salted Caramel and Sicilian Orange.

In 1881, Louis Sherry introduced the French chocolate-making tradition to New York and quickly established a reputation for excellence. Sherry's dedication to quality is present today in every truffle we craft. Only the highest quality ingredients, ethically sourced from Ecuador to Madagascar to the Caribbean coast of Venezuela, are used by our master chocolatier. In celebration of our heritage, each array of chocolates is packaged in the traditional Sherry's tin, a recast of the original, now more than 100 years old.

“When it's a matter of good taste--Sherry's.” Such was our founder's promise 130 years ago. We strive to live up to it today.

Rain splashing outside. The clippity-clop of horses' hoofs upon the pavement blocks. The roar of trains upon the Elevated, almost directly above. And Louis Sherry stroking his moustache as he stands in the door of his new candy shop and restaurant, which he is to open this very evening-the year is 1881. Perhaps, he thinks, he has made a mistake in undertaking this venture. Perhaps New York is not quite ready for a place of this sort. But soon there would not be many evenings to be standing in the doorway of his shop, watching the traffic in the avenue. Business begins to pour in upon him and from the outset his confections were met with instant acclaim.

Sherry's grew with New York from this first location at 662 Sixth Avenue to 37th and Fifth Avenue and again to his flagship store at 691 Madison Ave (now occupied by HERMES). From these locations, elegant lavender tins of chocolate were turned out for all the world to enjoy. Louis Sherry leaves New York the legacy of the Sherry-Netherland Hotel, and his eponymous confectionary brand. Together, they are, and will continue on as surviving institutions of New York's gilded age. 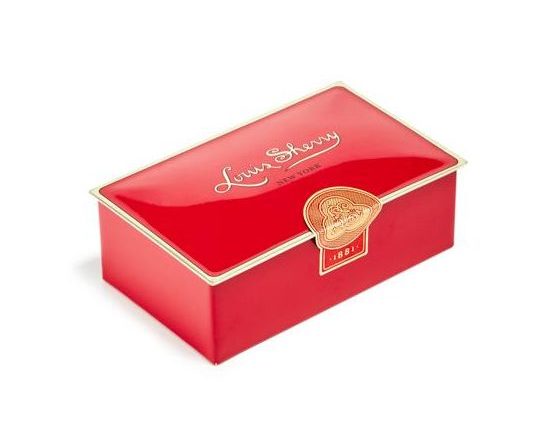